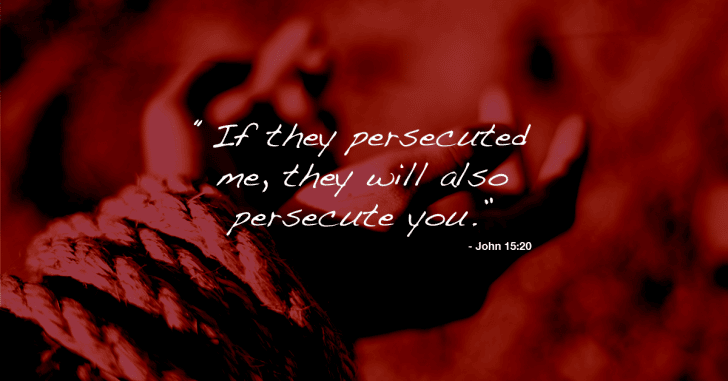 18 “If the world hates you, know that it has hated me before it hated you. 19 If you were of the world, the world would love you as its own; but because you are not of the world, but I chose you out of the world, therefore the world hates you. 20 Remember the word that I said to you: ‘A servant is not greater than his master.’ If they persecuted me, they will also persecute you. If they kept my word, they will also keep yours. 21 But all these things they will do to you on account of my name, because they do not know him who sent me. 22 If I had not come and spoken to them, they would not have been guilty of sin, but now they have no excuse for their sin. 23 Whoever hates me hates my Father also. 24 If I had not done among them the works that no one else did, they would not be guilty of sin, but now they have seen and hated both me and my Father. 25 But the word that is written in their Law must be fulfilled: ‘They hated me without a cause.’

16:1 “I have said all these things to you to keep you from falling away. 2 They will put you out of the synagogues. Indeed, the hour is coming when whoever kills you will think he is offering service to God. 3 And they will do these things because they have not known the Father, nor me. 4 But I have said these things to you, that when their hour comes you may remember that I told them to you. John 15:18-16:4 (ESV)
[/efstoggle]
[/efstoggles]

Why was Christ hated? Christ was hated by the world because he exposed the world. He spoke with authority. He had insight into human nature. He did not flatter His listeners with pious words about human good. He spoke about the sinfulness of the human heart and judged our hidden motives. He exposed us for who we are – wicked sinners incapable of saving ourselves.

The world hates hates the true Christ, because because the world loves ‘religion’. The world is infatuated with the idea that we can somehow earn favor with God by our religious efforts. “Religion” appeals to pride and self-effort. The world thrives on the concept that “I achieved it, I earned it, I accomplished it”.

The world rejects the concept that we are incapable of achieving, accomplishing or earning anything in terms of our salvation, our forgiveness, or our eternal life. We are totally and utterly dependant on Christ and Christ alone. That’s the message of the cross. For the word of the cross is folly to those who are perishing, but to us who are being saved it is the power of God. (1 Corinthians 1:18) The world hates the message of the cross, therefore, the world hates and rejects Jesus.

Those who are true disciples of Jesus carry this same message – the message of the cross. If they rejected and hated Jesus, they will reject and hate you.

Christ was persecuted, so expect to be persecuted.

Christ was persecuted, so expect to be persecuted. Jesus said, “Remember the word that I said to you: ‘A servant is not greater than his master.’ If they persecuted me, they will also persecute you.” (John 15:20)

The Pharisees and the Sadducees were after Him with vengeance. They sought to silence the message that He was delivering. Those who will follow Christ should not expect to be treated any differently.

Much of the time, those who are doing the persecuting will think that they are doing God a favor. John 16:2 – They will put you out of the synagogues. Indeed, the hour is coming when whoever kills you will think he is offering service to God.

This was the case with Jesus and in the early church. The Jews, the religious people, believed they were on God’s side when they put Christ to death. he same is true with the early disciples. Even the apostle Paul believed he was carrying out the work of God by persecuting and murdering the people of the Way. See Acts 9:1-2;5.

This persecution is happening because they don’t know or love the the Father of the Son.  Jesus said, “…they have seen and hated both me and my Father. (John 15:24) And they will do these things because they have not known the Father, nor me. (John 16:3) Even though they think they know him, they don’t and even though they think they love him, they actually hate him.

It is happening today…

Hitler, Stalin, and Mao are all good examples of how secularism brought about its ultimate conclusion: The state becomes a substitute for God, and this false god will attack the people of the true and living God. There are already many in our society who have taken away our freedoms and are presently lobbying to remove more of them.

But now we face an even more tangible threat as the Islamic State of Iraq and Syria, along with other jihadist Muslims, have made it clear that they are carrying out the mission of Allah to eradicate the people of the cross. This was once only true in the Middle East, Africa and other primarily Islamic religions, but now it’s a reality even here on US soil.

As I began preparing this message, I watched video after video of testimony of those in Africa, India, the middle east and China who were been brutally beaten, who witnessed beheadings, who severely tourchered, those left for dead or who fled into the jungle all because of their identity in Christ as people of the cross.

Three reasons why you aren’t being persecuted

You might be thinking, Jesus said I would be persecuted, why haven’t I experienced persecution like this? Let’s take a look at three reasons why you might not be experiencing persecution.

Persecution is coming, be ready!

Jesus is saying, persecution is coming and I’m warning you so you won’t fall away. John 16:1; 4b – “I have said all these things to you to keep you from falling away… that when their hour comes you may remember that I told them to you. Jesus has warned us so we won’t fall away when it happens. Are we ready?

What I witnessed in these videos were people who had such a deep, abiding connection to the true vine that the more they were tortured, beaten, displaced from homes and community, the more they loved and treasured the grace of Christ. I witnessed those who were captured and given the opportunity to live by denying Christ and the cross, but instead were beheaded, burned alive or shot in the head because they considered Christ and His atonement on the cross a greater treasure than even their own lives.

[efstoggles class=”yourcustomclass”] [efstoggle active=”” title=”Click here for today’s text”]48 The Jews answered him, “Are we not right in saying that you are a Samaritan and have a demon?” 49 Jesus answered, “I…

16 When evening came, his disciples went down to the sea, 17 got into a boat, and started across the sea to Capernaum. It was now dark, and Jesus had not yet…

22 On the next day the crowd that remained on the other side of the sea saw that there had been only one boat there, and that Jesus had not…

16 “For God so loved the world, that he gave his only Son, that whoever believes in him should not perish but have eternal life. 17 For God did not send his… 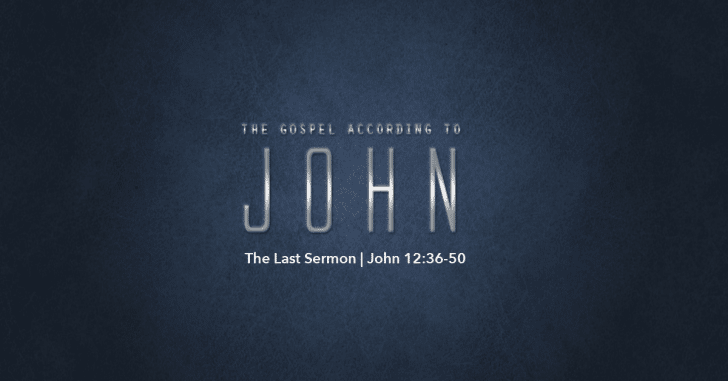 [efstoggles class=”yourcustomclass”] [efstoggle active=”” title=”Click here for today’s text”] 36 While you have the light, believe in the light, that you may become sons of light.” When Jesus had said…