We’d love to hear from you!

Send us a note! 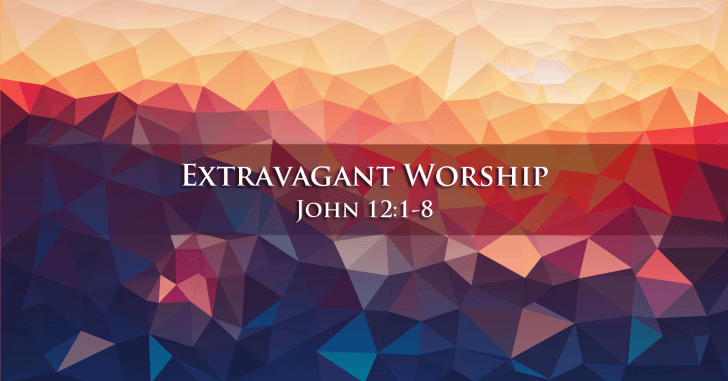 Click here for today's text
Six days before the Passover, Jesus therefore came to Bethany, where Lazarus was, whom Jesus had raised from the dead. 2 So they gave a dinner for him there. Martha served, and Lazarus was one of those reclining with him at table. 3 Mary therefore took a pound of expensive ointment made from pure nard, and anointed the feet of Jesus and wiped his feet with her hair. The house was filled with the fragrance of the perfume. 4 But Judas Iscariot, one of his disciples (he who was about to betray him), said, 5 “Why was this ointment not sold for three hundred denarii and given to the poor?” 6 He said this, not because he cared about the poor, but because he was a thief, and having charge of the moneybag he used to help himself to what was put into it. 7 Jesus said, “Leave her alone, so that she may keep it for the day of my burial. 8 For the poor you always have with you, but you do not always have me.” (John 12:1-8 )

This story has always been a mystery for me. I have heard it preached as a message for giving, as a message for not giving, and a message for worship. As I see it the message is about worship. Not just casual, sing a song type worship. But all out crazy worship. The kind of worship that makes people uncomfortable.

We have to read a little bit into this to go there. Jesus just came from raising Lazarus from the dead. Mary is not just a little bit grateful. She loves her brother and to be there when they wrapped him in grave clothes must have been an overwhelming blow. Especially when she had hoped for Jesus to come and heal her brother. Watching the stone be placed in front of the tomb was probably all she could handle. Four days she believed her brother was gone forever. Now here he was sitting at the same table with her and Jesus. A reminder of the power Jesus held by just a word.

So Mary takes what had to be her most prized possession. Ointment that cost a year’s wages for a laborer. Think about spending $30,000-$50,000 on something that you love dearly and then use it in a moment of sheer jubilation. We are talking crazy stuff here. Then things take a sharp left turn. She uses her hair to wipe His feet. That is such an intimate thing to do. No way would that be acceptable in public. She would only do that to a husband or lover and only in private.Total disregard for others around her. Total ignoring social norms.

A couple of other examples from the Old Testament I wanted to touch on to get to where this story takes us.

After these things God tested Abraham and said to him, “Abraham!” And he said, “Here I am.” 2 He said, “Take your son, your only son Isaac, whom you love, and go to the land of Moriah, and offer him there as a burnt offering on one of the mountains of which I shall tell you.” 3 So Abraham rose early in the morning, saddled his donkey, and took two of his young men with him, and his son Isaac. And he cut the wood for the burnt offering and arose and went to the place of which God had told him. 4 On the third day Abraham lifted up his eyes and saw the place from afar. 5 Then Abraham said to his young men, “Stay here with the donkey; I and the boy will go over there and worship and come again to you.” 6 And Abraham took the wood of the burnt offering and laid it on Isaac his son. And he took in his hand the fire and the knife. So they went both of them together. 7 And Isaac said to his father Abraham, “My father!” And he said, “Here I am, my son.” He said, “Behold, the fire and the wood, but where is the lamb for a burnt offering?” 8 Abraham said, “God will provide for himself the lamb for a burnt offering, my son.” So they went both of them together.

9 When they came to the place of which God had told him, Abraham built the altar there and laid the wood in order and bound Isaac his son and laid him on the altar, on top of the wood. 10 Then Abraham reached out his hand and took the knife to slaughter his son.11 But the angel of the Lord called to him from heaven and said, “Abraham, Abraham!” And he said, “Here I am.” 12 He said, “Do not lay your hand on the boy or do anything to him, for now I know that you fear God, seeing you have not withheld your son, your only son, from me.” 13 And Abraham lifted up his eyes and looked, and behold, behind him was a ram, caught in a thicket by his horns. And Abraham went and took the ram and offered it up as a burnt offering instead of his son. 14 So Abraham called the name of that place, “The Lord will provide”; as it is said to this day, “On the mount of the Lord it shall be provided.”

15 And the angel of the Lord called to Abraham a second time from heaven 16 and said,“By myself I have sworn, declares the Lord, because you have done this and have not withheld your son, your only son, 17 I will surely bless you, and I will surely multiply your offspring as the stars of heaven and as the sand that is on the seashore. And your offspring shall possess the gate of his enemies, 18 and in your offspring shall all the nations of the earth be blessed, because you have obeyed my voice.” (Gen 22:1-18  )

I am not suggesting you take you kids and go for a little walk in the woods. I think the point here is that we all have those things that we treasure more highly than God. Isaac was the offspring Abraham had waited for his whole life. In fact Isaac was God’s promise to Abraham. All the events surrounding Isaac’s birth and the promises concerning him, it seemed unbelievable that God might require him from Abraham. But like Mary, he gave him up for the sake of relationship with the Father.

David was another great example. When they were bringing the Ark of the Covenant to Jerusalem it started to tip over and one of David’s men reached out to catch it. Because of that God struck him down. Needless to say everyone was terrified of moving the Ark any farther. Having the Ark in Jerusalem was David’s dream for a long time. It represented God’s favor and God’s presence among the children of Israel. When they finally got it to Jerusalem David did a little inappropriate worship of his own.

12 And it was told King David, “The Lord has blessed the household of Obed-edom and all that belongs to him, because of the ark of God.” So David went and brought up the ark of God from the house of Obed-edom to the city of David with rejoicing. 13 And when those who bore the ark of the Lord had gone six steps, he sacrificed an ox and a fattened animal. 14 And David danced before the Lord with all his might. And David was wearing a linen ephod. 15 So David and all the house of Israel brought up the ark of the Lord with shouting and with the sound of the horn.

16 As the ark of the Lord came into the city of David, Michal the daughter of Saul looked out of the window and saw King David leaping and dancing before the Lord, and she despised him in her heart. 17 And they brought in the ark of the Lord and set it in its place, inside the tent that David had pitched for it. And David offered burnt offerings and peace offerings before the Lord. 18 And when David had finished offering the burnt offerings and the peace offerings, he blessed the people in the name of the Lord of hosts 19 and distributed among all the people, the whole multitude of Israel, both men and women, a cake of bread, a portion of meat, and a cake of raisins to each one. Then all the people departed, each to his house.

20 And David returned to bless his household. But Michal the daughter of Saul came out to meet David and said, “How the king of Israel honored himself today, uncovering himself today before the eyes of his servants’ female servants, as one of the vulgar fellows shamelessly uncovers himself!” 21 And David said to Michal, “It was before the Lord, who chose me above your father and above all his house, to appoint me as prince over Israel, the people of the Lord—and I will celebrate before the Lord. 22 I will make myself yet more contemptible than this, and I will be abased in your eyes. But by the female servants of whom you have spoken, by them I shall be held in honor.” 23 And Michal the daughter of Saul had no child to the day of her death. (2 Samuel 6:10-23)

Webster’s Collegiate Dictionary defines the word extravagant as “2a: exceeding the limits of reason b: lacking in moderation, balance and restraint, praise) c: extremely or excessively elaborate 3a: spending much more than necessary b: profuse, lavish.”

Does this sound like you? If I am being honest it doesn’t sound much like me either. So what holds us back? Worry? Fear? Distractions? Other Loves? Peer pressure? Religious norms? In our story Jesus responds to Judas’ negative words with a few of His own. Does this sound a bit strange to you when He says the poor you have with you always? It does to me.

We know Jesus has a heart for the poor. We also know that the separation of the sheep from the goats Jesus is actually quoting a scripture out of the Old Testament.

For there will never cease to be poor in the land. Therefore I command you, ‘You shall open wide your hand to your brother, to the needy and to the poor, in your land.’ (Deuteronomy 15:11)

The law had already provided provision for the poor. Jesus wasn’t trying to lessen the importance of that. He was trying to point out that this wasn’t about caring for the poor. What was going on here was outside of that.

Scarcely had I passed them when I found him whom my soul loves. I held him, and would not let him go…  (Song of Solomon 3:4)

That is what Mary was feeling. She was trying to hold on and not let go.

Perhaps she understood what Jesus was saying when He told the disciples that He was going to be crucified. Perhaps she knew the time was short. Whether she did or not, she had found the one whom her soul loved.

I appeal to you therefore, brothers, by the mercies of God, to present your bodies as a living sacrifice, holy and acceptable to God, which is your spiritual worship. Do not be conformed to this world, but be transformed by the renewal of your mind, that by testing you may discern what is the will of God, what is good and acceptable and perfect. (Romans 12:1-2)